The drive south around Christchurch is flat and dull until we turn off Highway 1 and head for Fairlie and Burke pass when we start to get hints of the Alpine scenery that is to come later on. We arrive at Lake Tekapo in the early afternoon and the temperature has soared to 29 degrees under a bright blue sky that sets off the glacial, powder blue of the lake itself. The village has a resident population of about 400 but that swells to thousands during peak times. 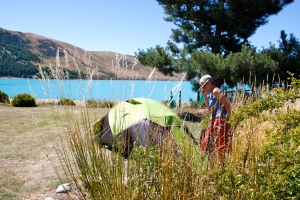 The hostel is full but has a camp pitch just metres from the lake on an elevated green that gives a wonderful view down the valley. We are getting good at pitching now and we are soon set up and have arranged to borrow several blankets and a duvet because the temperature is set to drop to 8 degrees once the sun sets as the sky will be clear. Tonight’s sunset sets off a subtle change in the colour of the water and for a while the mountains shine brightly against the darkening sky and are reflected, red, in the water. And soon it is dark and very chilly.

There is an observatory on Mt. John just above the village because the atmosphere in this part of the mountains is so clear and so we are looking forward to some stars tonight as a compensation for having to brave the cold for the inevitable nocturnal pee ( or three in Marilyn’s  case).The tent is cosy and warm, if a bit smelly from the old wool blankets, and the stars do not disappoint although perhaps they were brighter last night. Maybe the ambient light from the village just takes the edge off the sparkle from the stars.

Tonight we have another lakeside hostel booked at Waneka but the journey is not as long as some we have done so we have time to explore the local area before setting off and decide to drive up to the observatory at the top of Mt John.

We have been less than impressed with the signage around some parts of New Zealand and our little detour to Mt. John reinforces this disappointment. It should be a half hour detour off the main road, along a windy valley floor and then a short, steep ascent to the mountain top. However, half way up the mountain we are stopped by a young woman who is part of a road gang working on resealing the road. We will have to wait half an hour while a little stretch is closed so that the gang can lay a fresh surface. We are not unduly put out by this as there are lovely views all around and we are not in a hurry and we wait for the all clear. Half an hour soon becomes an hour and then a bit more before we are let through, along with the now quite long queue behind us. 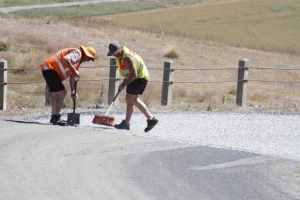 The views are quite stunning. We can see our little campsite way below and the azure blue lake spreads away surrounded by the hills. In the distance can be seen the snow capped peaks of the Alps and Mt. Cook.

We decide against a coffee break here and make the choice to descend and carry on our journey……to be stopped by a young lady who informs us that our descent will be delayed while the team reseals another stretch of road! About twenty minutes she says! Of course this becomes an hour and now we have to ask about why a simple sign was not placed at the foot of the mountain warning of possible one or two hour delays because of roadworks. At least then we would have had the choice of whether to go up or leave it. ‘Good idea’, she says. At least two hours too late!

The road to Waneka from Tekapo is another of the great drives. As we leave Mt. John we head into the hills that surround lake Pukaki and suddenly have a wonderful view of the Alps reflected in the lake. 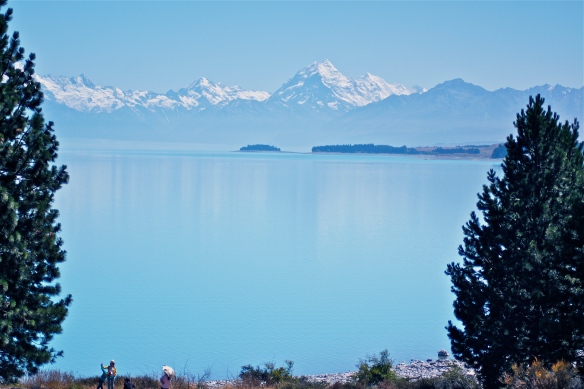 Then it’s over the winding Lindis pass where we stop briefly to be blown away both by the view, the swathes of wild lupins and the now increasing wind.

We then descend into Tarras where we discover the story of Shrek the sheep (which is well worth googling.) He is a celebrity in these parts.  Shrek was a merino sheep who went feral to avoid the muster two years running and, when discovered had a 25 kilo fleece that was ceremoniously shorn on a glacier to raise money for charity. Books and films are written about him and he lived the life of a celebrity until his recent demise.

I would recommend anyone passing through Tarras to stop at the coffee shop/store which has some of the finest coffee and homemade cake we have come across as well as some lovely merino products and local wines.

Tonight we have to have a room as we cannot camp in the village itself. Waneka YHA is another well equipped hostel with clear views from the front onto the lake and on to Mt Aspiring and the surrounding mountains that become ski resorts in winter. I prefer Waneka to Queenstown as a Lakeside stop. It is much more laid back than its adrenalin fuelled neighbour, is much more compact and is far less trendy.

The beach is peppered with sunbathers enjoying the afternoon temperatures that have remained in the high twenties despite the promise of an imminent change. We enjoy a casual walk on the beach before getting together the ingredients for a barbeque back in the hostel garden as the sun goes down on another day. 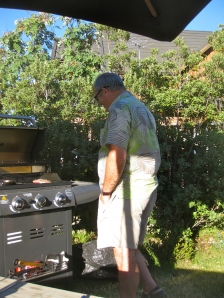 Sixty and still Rockin'.......all around the free world.